A Blend of Autos, Software, Inspirations, Fashion and health

Health and Fitness tips. Take control on your food, diet and drinks. including discussions about weight lifting and exercise........
Post Reply
9 posts • Page 1 of 1 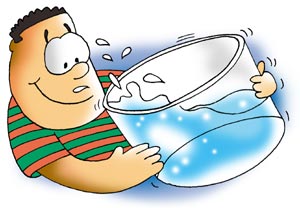 Just replace some of the high calorie foods you eat with fruits, vegetables and other water dense foods that keep you just as full.

We know it sounds too good to be true, but new research conducted at Pennsylavania State University suggests it is possible to lose weight by making small changes in your diet.

The women in the study ate a whopping 800 fewer calories a day as a result of these dietary changes.

"I am not a great advocate of simply telling people to eat less, because they are going to get hungry if they do that... What we are trying to do is give people satisfying amounts of food that are less calorie dense," says Barbara Rolls, a nutrition researcher who conducted the study.

Rolls says though weight loss was not considered in the study, the reduction of 800 calories per day could result in a weight loss of about a pound and a half (0.68 kilos) over the course of a week.

"The rationale behind eating water dense foods is that whatever you eat can go out of the system very fast," says Dr P K Chowbey, an expert in obesity management at Sir Ganga Ram Hospital, New Delhi.

He cites the example of an apple which has 98 per cent liquid and very few calories. A sweet of the same size will have 20 times more calories.

Dr Chowbey says that, as a result of our tropical climate, Indians drink more water than Americans, whose water intake is almost zero. But, because of the growing fast food culture and decreased physical activity, obesity levels have gone up drastically among Indians -- at present, it is 37 percent among men and 42 percent among women.

He also says the awareness level about low calorie food is not high among Indians.

"People tend to eat the same amount of food each day, regardless of the calories. Adding vegetables to that pizza, lasagna or casserole will increase the food's volume and result in fewer overall calories consumed since portion sizes tend to stay the same," explains Rolls.

Another study on obesity shows a link between lack of sleep and gaining weight -- skimping on sleep may make you vulnerable to obesity.

The finding is based on data from the National Health and Nutrition Examination Survey conducted in the US. The study discovered that people who reported getting less than seven hours of sleep a night were more likely to be obese on initial evaluation.

They were also more likely to develop obesity during the follow-up evalution. Even one hour of sleep can make a lot of difference, it says.

Why water is necessary

1. Our bodies contain over 70 percent water.

2. You can go longer without food than water.

3. Our bodies need a lot of water to function efficiently.

When your body is not getting enough water

~It tries to hold on to the water it has. Since over 70 percent of our muscle is made of water, the lack of it makes our body use the existing water for other functions, leaving you bloated.

~How do you get rid of that excess water? By drinking enough water!

Hot or cold water?
~Many experts tend to advocate cold water, because the stomach absorbs it more quickly.

They believe that cold water might enhance fat burning.

~Warm water is, however, easier to drink in large quantities and you might drink more of it without even realising it. Do whatever suits you, here. Just drink more!

How much water?
You must drink at least seven to eight glasses (1.9 litres) of water a day.
Top

It's a very good ideas for weight loose..
Top

i agree with this information .
Top

Drinking 8 cups of water daily can help you shed about 19 pounds annually.

Definitely agree with what you stated. Your explanation was certainly the easiest to understand. I tell you, I usually get irked when folks discuss issues that they plainly do not know about. You managed to hit the nail right on the head and explained out everything without complication. Maybe, people can take a signal. Will likely be back to get more.
Top

No doubt that water is very useful for weight lose. Its a natural way to burn all extra fat and calories. It is good to drink lot of water in a day. Its our basic need and we can't live without it.
Top

Drink before you eat. Because water is an appetite suppressant, drinking it before meals can make you feel fuller and therefore reduce your food intake.
Replace calorie-filled drinks with water. .
Drink it ice cold. ...
Hit the gym. ...
Make sure you get enough.
Top

I agree with this information .
Top
Post Reply
9 posts • Page 1 of 1